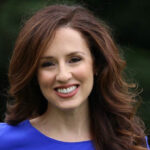 Shoshana Ungerleider, MD is the founder of endwellproject.org, a practicing internist at Crossover Health in San Francisco, writer and leading voice in healthcare who regularly appears as a medical contributor on CNN, MSNBC, CBS News with bylines in TIME, Scientific American, the San Francisco Chronicle, Vox, STAT and many others. She executive produced two Netflix Oscar-nominated films, Extremis and End Game. Her most recent film, Robin’s Wish, is a biographical documentary about the final years of actor and comedian, Robin Williams.