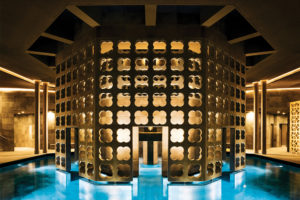 A new focus on silence at wellness destinations and spas came through loud and clear in Summit presentations: from Dr. Franz Linser’s keynote (2016 Summit co-chair; founder, Linser Hospitality), “Wellness As It Was Meant to Be”–to Tom Bauer’s talk (COO, Vamed Vitality Resorts) on future, silent directions in wellness resorts–to the Wellness Tourism Roundtable exploring what will constitute “Wellness Tourism 2.0”. Linser argued that wellness programming at hotels/retreats today can sometimes feel like nothing more than an “operational line-item” (some fitness classes or spas to “check off”), while future destinations will need to put a deeper, more comprehensive focus on the true “art of living”-from helping people “do” to helping them “be” – and that will include a much more powerful focus on silence and nature. Bauer’s talk argued that time, space and silence will be the most precious future luxuries, and that retreats (like his just-opened “Silent Spa”–more below) will need to help people restore inner silence, make contemplation possible, and will specifically explore “how much spiritual buildings and spas have in common.”

The Past: Wellness retreats and spas have always aimed at being serene sanctuaries, but frankly, many have remained too noisy: people clattering away on phones even in “quiet rooms.” And the first wave of “digital detox” was often only about confiscating guests’ devices, but with very little else truly transformative on offer.

The Future: As digital noise ratchets up, we will see a sharper focus on silence, mindfulness and deep nature at hotels, retreats and spas: from new “silent spa” models to more wellness destinations being developed in (and with the quiet, contemplative values of) former monasteries. We will even see more silent eating and restaurants, salons, gyms, stores and airports…

It’s hard to believe that the first smartphone was unveiled less than a decade ago (2007)–a technology has exploded faster than any other in human history. Those sleek, harmless-looking, little weapons that have since shackled humans to the Internet, media/social media, and work, every waking hour. This eternal (infernal) connection quickly decimated the work-life divide, sleep, and any sense of “free time” or true peace. And alongwith that other great recent force, urbanization, it now means that humans are suffering unthinkable stress and… in a word, NOISE.

This has given rise to sharp new desires: for actual silence, quiet contemplation, to leave the shrieking world totally behind, and to be near, and hear, the “silence” of nature. And wellness resorts and spas (and even salons, restaurants, gyms, stores and airports) are answering the desperate cry for silence.

If wellness retreats and spas have always sought to deliver peace (not always successfully), now we’re seeing true “silent spas” launch (with silent bathing, treatments, therapists…everything). And if quiet, mindfulness and time-in-wild-nature are becoming the core offerings (as opposed to the old bling-y, hyper-luxury amenities) at more spa resorts, that trend is finding its perfect expression in more properties being developed in (and infused with the quiet, mindful values of) former monasteries, abbeys and nunneries. In addition to more spas appearing in more retreat-from-theretreat- from-the-world spaces like crypts, caves, former bank vaults, etc. Silent restaurants and silent meals at hotels or wellness retreats are also on the rise.

And this isn’t simply the old, sometimes awkwardly forced “digital detox,” where devices get confiscated, say, at some noisy urban hotel, with little else transformative on offer. While the “wellness monastery” is a neat encapsulation of the silence trend, it’s about everything–from property design and “vibe” to room design and treatments and experiences–shifting to more uncompromising quiet, authenticity and nature.

The Medical Evidence for Silence: Given that always-on digital connection is such a new phenomenon, the medical establishment is just beginning to grasp how it’s destroying our health and sanity. But recent studies confirm that both noise–and digital “noise”–hurt our focus and sleep, and increase stress hormones, anxiety and depression. But what is the impact of periods of silence on the brain? A Duke University study (2013) found that two hours of silence daily incited significant cell development in the hippocampus, the brain region related to the formation of memory. And “the brain on silence” is a brain evaluating internal and external info into “a conscious workspace”…establishing how we fit into the world. So, if depression and dementia are both associated with decreased hippocampus neurogenesis, silence looks to be a promising therapy.

Silent Spa: Vamed Vitality World (operating nine thermal/spa resorts across Austria and Hungary) announced at the Summit that it would open a “Silent Spa” at Therme Laa Hotel & Spa (north of Vienna), the first comprehensively silent bathing/spa experience (with the exception of check-in and the restaurant), complete with silent assistants and coaches. And while brand-new, the spectacular property was designed explicitly on the principles of “sacred architecture”: with spa areas modeled (and named) after “choir stalls,” “cloisters,” “monastery gardens” and a “baptismal font” (cascading waterfalls), etc. Reimagining sacred church design to create a modern “world of contemplation.” (It opened on 12.6.16.)

Eremito (Umbria, Italy) is a soulful, stunning example of the new “wellness monasteries”: housed in an ancient monastery on 7,000+ acres of unspoiled nature, with a focus on meditation, yoga, hiking, reading, etc. And complete disconnection: no WiFi or phone signal, and at 8PM the gong announces it’s time for the silent, mindful dinner held in a candlelit dining room. Self-described as a “secular monastery”, Eremito’s DNA is peace, contemplation and re-finding oneself…no wonder it was Conde Nast Traveler’s 2016 winner for “Best Mental Recovery.”

Le Monastère des Augustines (Quebec, Canada) A hotel and spa/wellness center set in a 17th century monastery and hospital, with a focus on quiet and mindfulness, and offering personalized meditation, yoga, sleep therapy, massage, and so many other wellness classes. Organic food from the monastery garden; breakfast is taken in contemplative silence; and guests head to the chapel at dusk to hear the nuns sing Vespers.

Hotel Monastero Santa Rosa (Amalfi Coast, Tuscany) is about high-luxury mindfulness set in a 17th-century monastery (with an infinity pool perched on a dramatic ocean-side cliff). The vast, cavernous spa, set in a space where nuns once performed silent meditation, includes vaulted Roman baths and a sauna carved out of rock, with treatments also performed in nature and private gardens.

At Hotel Klosterbräu (Tirol, Austria), the huge “Spiritual Spa” is inspired by its ancient monastery setting, and revolves around the former monks’ “10 pillars of contemplation”.

Actual Monasteries: Stays at the hundreds of actual monasteries worldwide are a rising form of hyper-authentic wellness travel. Monasteries have a long tradition of welcoming guests at incredibly affordable prices: from the silent Shunkoin Temple complex in Kyoto, offering Zen meditation with the temple’s abbot–or at Tassajara Zen Mountain Center in Carmel, California, where monks offer retreats on mindfulness, spirituality and creativity. For hard-core silence-seekers, there are 300 Buddhist Vipassana centers globally, for an intensive, spartan ten days of “noble silence” and self-purification.

Ancient & Hidden Spa Settings: Spas set in hidden, silent (often ancient) places are on the rise, from natural caves to crypts. For example, the new Atrium (spa/sauna center) in Mâcon, France is set in a medieval stone crypt, while the new Away Spa at the W Amsterdam is set in vast, historic bank vaults and safes.

Other Silent Moves:
On (12/14), all Mandarin Oriental properties will hold their next “Silent Night” spa retreat: no music, no talking, silent therapists, for “noisefree contemplation and human touch.” Mandarin Oriental hotels also just launched a brand-wide “digital wellness” initiative: surrender your phone and follow a regime developed by the Mayo Clinic, including everything from calming teas and oils and therapeutic coloring books. At checkout, reclaim your cleaned device, now repackaged in a protective gold shield.

A Digital “Kill Switch”: Dr. Harry Konig, Head of Medical Care, Brenner’s Park Hotel & Spa (Germany), explained their “digital silence” solution for their new, award-winning Villa Stephanie: at great expense and a technical challenge, they installed unique copper plates in guests’ walls, so all you have to do is hit a bedside “kill switch” to completely disconnect your room from WiFi, mobile reception and even electricity… aiding profound sleep.

A silent restaurant making loud headlines: Ichiran ramen shops (60 locations Japan, HongKong) that just opened its first U.S. restaurant in Brooklyn, where solo diners sit in booths facing the wall, and speak to nobody: not to be seated or to order (lights show available booths and diners fill out their order on a menu which is scanned by an electronic reader at each table). Disembodied hands appear with your noodle bowl. No faces, no words…a Zen, meditative, silent approach to eating.

Silent Salons: Even hair salons are offering silent experiences, as not everyone wants to talk (and talk) getting their hair done. BLO/OUT Blow Dry Bar (Philadelphia) has launched a silent “Zen experience”, after you explain what you want, total quiet. Similarly, Bauhaus Salon (Cardiff, South Wales) now has “Quiet Chair” options.

“Silent” Airports: Airports like London City, Bristol, Barcelona, Warsaw and Helsinki are no longer blaring “Please come to a white courtesy telephone”, they’re going silent: announcements are only made at boarding gates (except in true emergencies), with flight communications instead relayed at silent kiosks and displays, and via text and mobile apps. One of the loudest, most stressful places on Earth is set to quiet down.

Even Silent Gyms & Stores: Gyms (those earshattering places) are starting to experiment with silent sessions. For instance, Trinity Sports & Leisure (Somerset, UK) just launched special hours where there is no music or announcements.

This world will only become noisier, more urban and more digitally connected. For instance, David Bosshart (CEO of leading European thinktank, Gottlieb Duttweiler Institute) gave a heady Summit keynote on the many complex ways that evermore interconnected data is our human future: from screens disappearing because we will be invisibly connected everywhere and always to “reality” itself becoming a mesh of biochemical and electronic algorithms. He noted that, “technology will never be as slow as it is today,” and it poses some soul-searching questions for future wellness-focused businesses.

While the wellness industry will embrace new technologies–whether virtual reality or ingestible trackers monitoring bodies and minds, 24/7–it’s becoming clear that in a world where there is no escape from noisy digital connection, that wellness retreats and spas have the opportunity to become one of the lone cultural (and therefore sacred) spaces of silence, digital silence, unplugged human thought and nature. As technology escalates, their identity (or “brand proposition”) as unique places where timeouts from noise and hysteria can take place, also only escalates.

The silent, peaceful wellness retreat or spa will trump “high-tech” varieties because the need for disconnection is at triage levels. Silence increasingly sells: from expensive noise-cancelling headphones to Finland’s brilliant tourism campaign “Silence, Please”– promoting a place simply for its magnificent silent forests and nature. And no, “silence is not the new kale”, or some hysterical, fleeting, power-sold wellness trend. It’s one of the most meaningful trends in wellness that will only deepen and evolve in years ahead.

Travelers won’t want to take all their vacations at a quiet monastery-style wellness retreat, but they will want to take more of them. And if the idea of taking a few days at a place where you can’t compulsively text and check your social media “likes” seems scary…then you really need to ask yourself, how badly do I need this?